It was a beautiful day for an adventure on the backroads.  With no real destination in mind we headed north-east.  I opened up my topo map and saw that I had a little sticky note that pointed to an area that said, abandoned railroad bridge.  Arriving at the sticky note, was the ghost town of Lasita.

Settled in 1880 Lasita once was a small town of 35.  The farming community that surrounded the town supported the businesses and school.  The elevator, cemetery and one home is all that is left of the town that once had a 2 story school, general store, blacksmith, and stockyards.  There was an abandoned railroad, but the terrain didn’t support the type of railroad bridge that I was looking for.  Load up Wylie, let’s head south, I see a little town and creek on the map. 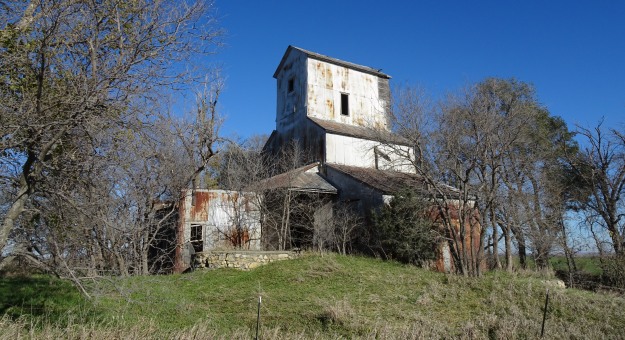 South of Lasita a few miles is

Settled in 1870 on its original site, it was moved 1 1/2 south when the railroad come in 1887.  In the 1960’s Fort Riley expanded to the edge of town and the village died out.  Only the Presbyterian Church and a few houses are left.

One of the largest stone arch railroad bridge in Kansas

What a treasure to have found!!  Such a beautiful warm (80) autumn day.